As a disruptive new force within water management and spatial planning, digital twins act as a means of accounting for the impacts of design choices in the public domain. This is accomplished through the careful digital modeling of physical objects such as buildings, bridges, and roads or systems and processes like the hydrodynamics of floods.
Nelen & Schuurmans, Virtual City Systems, and the district of Hof are currently developing a digital twin that is capable of simulating an emerging flood and its impact on buildings and infrastructure such as roads, bridges, and electricity. The digital twin is created for the city of Selbitz and Köditz. Both cities were hit hard by the recent storms on the 12th of July. According to the Deutscher Wetterdienst, more than 80l of rain fell within 12 hours in the regions. In the entire district the torrential rain led to floods that got people injured, roads closed, cellars and buildings flooded and power outages occurred.
The development of this digital twin is part of the Smart Cities project funded by the Federal Ministry of the Interior, Building, and Community and KfW. The digital twin will strengthen the municipalities’ ability to act and become more resilient against the types of floods that occurred on the 12th of July.

Both components can be modeled in various levels of detail (LOD), depending on the purpose of its use.

For the digital modeling of buildings, CityGML is the most common standard. Within that standard, 5 levels of detail are identified. Aerowest is a company that specializes in the collection of this data. They collect data for the cities of Selbitz and Koditz using a plane and advanced camera systems that are able to capture buildings from multiple angles. The resulting dataset is a LOD2+ dataset that includes the floors and their height (valuable information during a flood). This dataset can be upgraded to LOD3 including photorealistic textures of the buildings.
In other parts of Germany, the federal states collect the building of its territory as CityGML data set. The federal states submit this data to the central office for house coordinates and house rings (ZSHH) as LoD1 and LoD2 in CityGML format and distribute it themselves to architects, urban planners and similar users. Increasingly, the federal states or individual cities offer their CityGML data as Open Data.

For the digital modeling of floods, our hydrodynamic simulation platform 3Di is used. Based on the latest mathematical insights this platform is able to simulate the motion of water in processes such as rainfall run-off, infiltration, overland flow, sewerage flow, flow in the river, and around obstacles such as bridges, buildings, and culverts, ultimately to simulate floods. The most important dataset for such a model is the digital terrain model. In this case we used a DEM of 1m2, collected by the Bundesambt fur Kartographie und Geodesie.

To properly simulate floods, this dataset is edited to incorporate the obstacles in the terrain model such as the footprint of buildings, bridges, culverts and also the riverbed.

Historical or forecast runs of the flood model

To simulate floods the datasets mentioned above are uploaded to the hydrodynamic model engine of the 3Di platform. This engine computes how the water flows solving the full Saint Venant equations with conservation of mass & momentum using subgrid, quadtree, and cloud technology.

The rainfall input for the model comes from the precipitation forecasts of the ICON D2 weather model (Deutscher Wetterdienst) and can be used if the user is interested in the impact of upcoming weather events. The user can also simulate historical events using the radar observed rainfall data of RADOLAN (Deutscher Wetterdienst). These types of model runs can be used to investigate how the water system reacted and what measures or design choices in the public domain could help mitigate the impact of floods in the future. 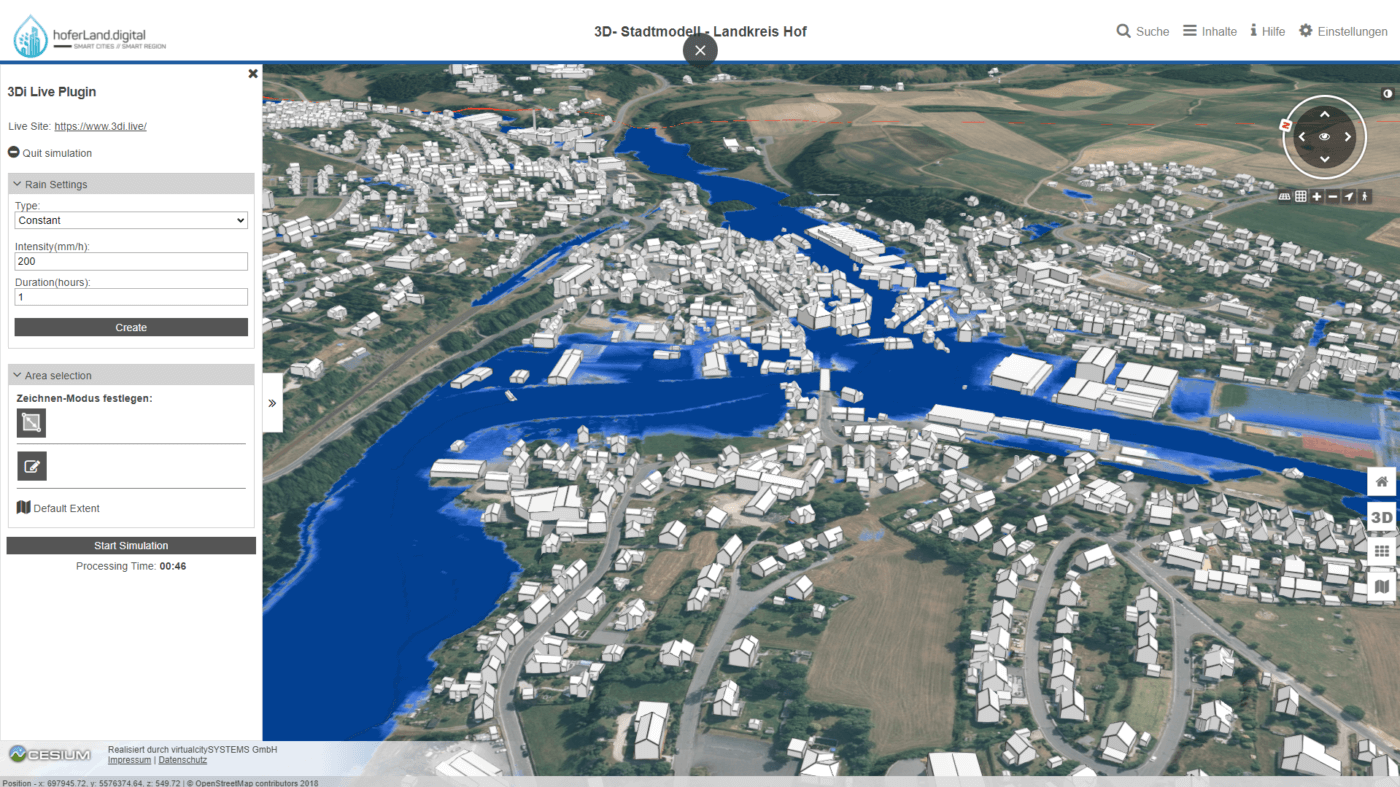 The digital twin comes to life when the digital model of the physical environment and the digital model of the flooding process are combined and integrated into one application. The VC View application from Virtual City Systems provides a comprehensive 3D viewer of 3D city models and the surrounding terrain.
The 3Di-API allows for the full integration of a hydrodynamic model within VC View and lets the user start a hydrodynamic simulation using either a precipitation forecast or historical radar data directly from their 3D City Twin.

Interested in the possibilities of integrating flood forecasting models into 3D Digital Twins? Reach out!