A need for better flood information

Five months ago Frogtech was invited to participate in the data application competition. The available IoT data includes those from the Central Weather Bureau, Water Resources Agency, city governments and others. Taiwan receives large amounts, around 3000mm, of rainfall each year. Short but high-intensity rainfall occurs frequently in summer and causes serious flooding problems. Government departments aim to improve the drainage systems, however it remains a challenge to adjust the infrastructure to match the drainage needs of ever more intense rainfall. With more and more people moving into the reclaimed lands, prone to flooding, the need for better information becomes obvious.

Although a lot of data is open to the public now, presenting that data as easy-to-understand information is a tough task. For example, water depth sensors provide time-series water depth data at a certain point which only represents the point situations instead of an aerial situation like a map. Furthermore, sensor data represents the history up to the present, instead of providing predictive information.

Using sophisticated flood modelling (3Di), Frogtech has converted the point water depth data into a 2D flood map. The model consists of the high-resolution terrain model and all hydraulic structures including sewer networks, pumps and orifices. The highest resolution terrain (also known as DEM) model is used in the Tainan 3Di model for giving far more accurate simulation outcomes. Another advantage is that rainfall simulations can be run via any web browser. For the flood forecasting system, the Tainan 3Di model was built to run simulations every hour and to provide accurate flood forecasts with a three-hour lead time. The time to create a forecast is just 7 minutes. Compared with the conventional models, such as Sobek, MIKE, HEC-RAS, 3Di is substantially faster and more accurate. Another feature of 3Di that caught the jury’s eyes is that users can interact with the 3Di model. Users can experiment with measures to reduce the flooding problem in a specific location. They can use pumps, elevate/lower the terrain on a certain area, and then 3Di calculates and visualizes what will happen on-the-fly. This makes it a very useful tool for communication between the expertise and the general public. 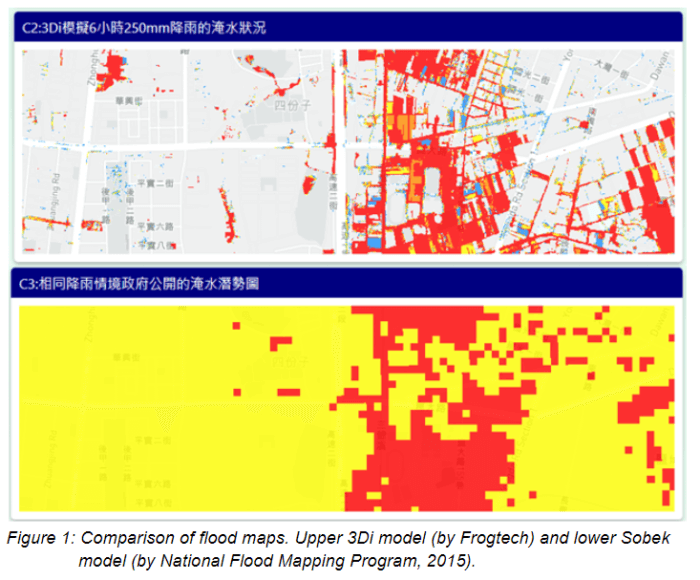 The generated static flood maps provide useful information for experts, however the general public might not know how to translate this into what it means for their location and related risks. Thus, in order to make sure flood risks are communicated well colouring is applied. Flooded roads or buildings are coloured red (high risk), yellow (medium risk), and green (low risk) to be understood at first glance. 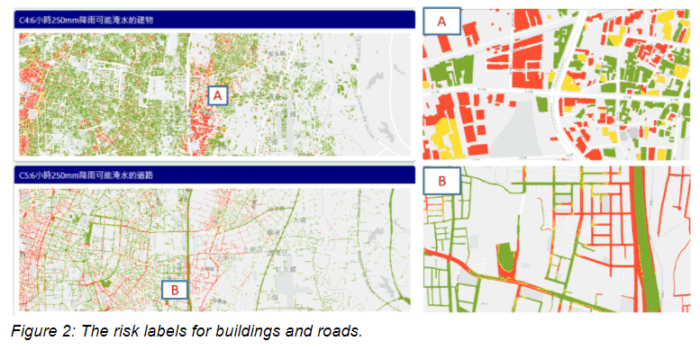